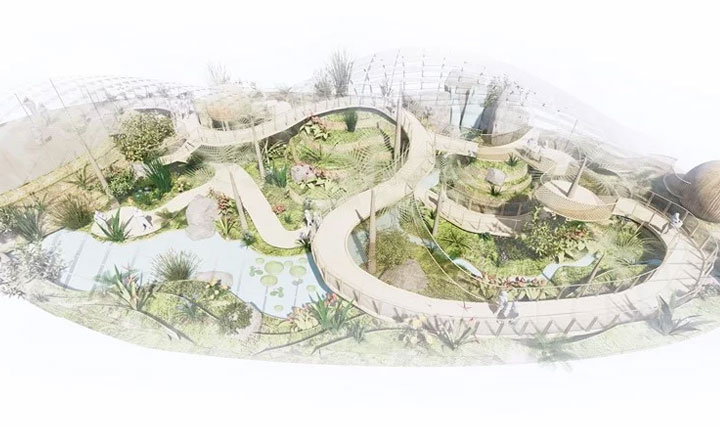 By combining geothermal and vertical farming technologies in a resort-style biodome, a new Reykjavik project could become a model for 21st century sustainable tourism.By Thomas Bishop -January 10, 20201560Share on FacebookTweet on Twitter

A pioneering vision in Iceland to improve life for locals and to transform tourism and hospitality is moving closer to reality.

The ALDIN Biodome Resort secured planning permission late last year to build the world’s first geo-climate biodome, a new type of heated greenhouse resort that grows its own exotic food, hosting dining facilities, yoga classes and other events, and providing comfort, health and nourishment all-year-round, while being entirely naturally carbon-emissions free in operations. (Disclosure: I’ve been connected with the ALDIN Biodome project for more than four years, including through arranging its partnership with Polar Research and Policy Initiative — a think tank where I serve as Head of the Built Environment — and through the architecture practice firm WilkinsonEyre, where I worked during my initial contact with the project.)

The resort is set to open its doors in 2023 and will be located just a 10-minute drive from the city center. The resort also passed a major milestone in late November, when the Reykjavik city authorities formally announced the resort’s planning approval, permitting development with an internal area of almost 5,000 square meters (54,000 square feet), featuring three zones with different climates and functions.

Within the project’s three spaces, the smallest of these, called the Farm Lab, will integrate the very latest in agritech and vertical farming technology and will be open to visitors, incorporating an organic food market, a restaurant and business and educational spaces. The other two areas will house larger tropical and Mediterranean environments plus resort functions, offering various health and lifestyle experiences such as ‘forest bathing’, as well as hosting tours, hot yoga and exercise classes, events, weddings, festivals and business conferences. The whole complex will be heated by tapping into the region’s abundant geothermal energy in the form of excess hot spring water from a direct source on site, which is part of Reykjavik’s supply system.

This creation of a geothermal climate biodome is also a vision unique to Iceland. It is a proposal rooted in Iceland’s unique natural resources and geology, with its cultural history of socializing in geothermal environments, and technology that already supports some of the largest greenhouse banana plantations in Europe. Drawing on these, the project will harness locally available natural resources — including some of the cleanest hot spring water and most fertile volcanic soil anywhere on earth — to create a lush, verdant oasis beneath a glazed dome, right in the heart of the Reykjavik capital region. It will be a place intended to rejuvenate spirits, as well as to inspire, enlighten and raise awareness of individual consumer choices.

Perhaps what is most surprising about this scheme, though, is that no one else has done something such as this in Reykjavik before. Icelandic winters are long, leading to increased anti-depressant use and limited opportunities for outdoor recreation and farming.  Meanwhile, the country with the northernmost capital city in the world has 2.4 million tourists that visit every year, lots of free space, plentiful geothermal heat and energy, along with the famous spring water and rich volcanic soil mentioned earlier.

Iceland has all the necessary ingredients, in other words, for a geo-climate leisure resort to succeed — and had even previously experimented with the concept on a citywide scale. The closest the city came was back in the 1930s, when proposals were put forward for every home in Reykjavik to receive geothermal heating and to use the plentiful hot spring water to grant every house a ‘winter garden greenhouse’ to grow vegetables and for leisure. The idea was intended to help make Reykjavik clean and smoke-free. The idea proved popular but the plans were never realized and the dream of Icelanders being able to enjoy such amenities lay dormant for many decades. By paying homage to this idea, the ALDIN Biodome Resort hopes to rekindle this vision for the city, albeit on smaller and more communal scale.

Drawing upon the historic precedent from the 1930s, the ALDIN Biodome resort seeks to build upon Reykjavik’s reputation as one of the ‘cleanest, greenest and safest cities in the world.’ By celebrating these core principles while pioneering new technologies and setting new milestones for the country, the resort also stands to make a clear statement of Icelandic ambitions, abilities and ingenuity.

Most interesting of all is that through its pioneering of geothermal climate technology, ALDIN Biodome will be the first carbon-emissions free and energy positive biodome resort found anywhere in the world, as well as Iceland’s very first green wellness and lifestyle center. By simultaneously breaking both of these two records, it will also serve as a showcase for the very best of Icelandic ideas, design and ingenuity. Comparisons might be drawn to Victorian London’s Crystal Palace of 1851, which sought to inspire awe and to exhibit ‘the art of the possible’ in the 19th century — but with the 21st century twist of emphasizing sustainability, health and quality of life for locals.

Hjördís Sigurðardóttir, the founder and CEO of Spor í sandinn, the Icelandic company behind the project, is especially keen that the resort flies the flag for Iceland as a leader in sustainability, and responsible tourism, both across the Arctic and elsewhere, even though it is being funded and built through the private sector. The entire resort is estimated to cost $40 million, with half the funding expected from equity investors.

For Sigurðardóttir, ALDIN Biodome will also stand in stark relief to other visitor attractions around the world. All too often these are vast, air-conditioned spaces, detached from nature and context, with colossal carbon footprints. Instead Sigurðardóttir envisions that by celebrating Iceland’s fresh produce, sustainable design and creativity, the ALDIN Biodome will be rooted in the community and beneficial for the planet, offering something authentic and Icelandic. ALDIN Biodome aims to be a living, breathing, immersive demonstration of the benefits of wellness and sustainability, bringing balance to people’s lives.

“We’re not truly aware of the riches we possess in Iceland and the opportunities they entail,” Sigurðardóttir said in an interview. “We can do so much more with these resources.”

Combining renewable geothermal energy with vertical farming technology would also be a breakthrough, especially as vertical farms such as AeroFarm in the U.S. and Jones Food in the U.K. are expanding, attracting supermarket contracts and hundreds of millions of dollars in venture capital investment, but have yet to make the leap to become carbon-neutral operations. Nor do they offer ‘farm-to-table’ experiences for visitors, as ALDIN intends to do.

Determined to push the envelope and to set new standards for a wellness resort, both technically and architecturally, ALDIN is being designed, constructed and operated in line with the most ambitious sustainability standards in the world; BREEAM and WELL Building Certification. The design process has also been through multiple iterations over since it began in autumn 2016. It is a testament to Sigurðardóttir and her team to have navigated the project through this period, unusually long by planning standards in other Western nations. The scheme has now completed its public consultation, with the design amended to a reduced height reflecting the input from local stakeholders.

Aside from the ground-breaking use of geothermal climate and agriculture technologies, the resort’s wider design and delivery team also includes a number of leading experts in biodome and climate-controlled design. The project architects WilkinsonEyre, designed two of the largest climate-controlled conservatories in the world at Singapore’s Gardens by the Bay, in 2012, while its environmental engineers, Atelier Ten, worked on Singapore’s Jewel Changi Airport, a biodome featuring the world’s largest indoor waterfall and rain vortex, which opened in April 2019.

With its iconic design, all-weather availability and central location, Sigurðardóttir thinks the project will become one of the top attractions in Reykjavik.

Drawing on the international interest in the project, Sigurðardóttir also sees a clear long-term opportunity for the business to address problems that are prevalent elsewhere. There could be biodomes and wellness attractions showcasing the very best of Icelandic ideas, sustainable design and ingenuity in cities all around the world.

“My passion is to see this become a type of infrastructure for the cities of the future,” she says, “an escape and release from the concrete jungles that we live in.”

For Sigurðardóttir, the ALDIN Biodome resort will showcase exactly the kind of healthier and sustainable lifestyles that modern cities lack, but that she believes Iceland is uniquely placed to demonstrate to the world.

Thomas Bishop is Head of the Built Environment at the Polar Research and Policy Initiative, a U.K.-based policy think tank, as well as chartered architect, development and sustainability specialist.

The views expressed here are the writers’ and are not necessarily endorsed by ArcticToday, which welcomes a broad range of viewpoints. To submit a piece for consideration, email commentary (at) arctictoday.com.