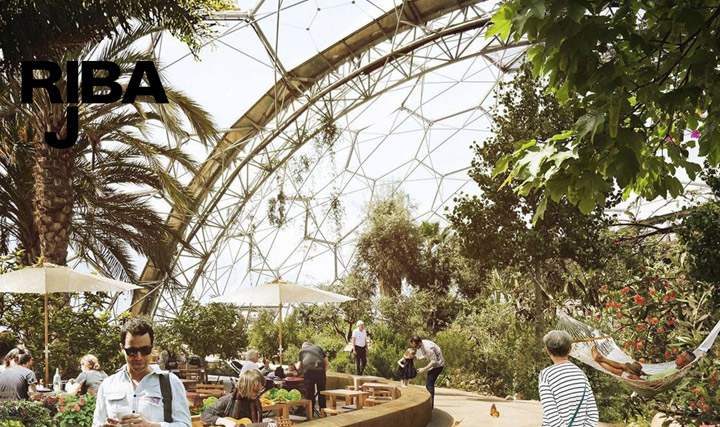 Two years ago Hjördís Sigurðardóttir dreamed of a sustainable oasis in Reykjavík. Now she has won the first round of planning for it. Thomas Bishop of Polar Research and Policy Initiative asked her about its place in Icelandic culture.

What was your inspiration for Aldin, Biodome Reykjavík?

I am originally a country girl, I was fortunate to grow up close to nature and work on my family’s farm. We need to make an ethical shift to become more sustainable and smarter in how we live our lives. The best way to do this is to draw inspiration from natural ecosystems so we are in touch with nature on a daily basis.

Iceland might have tiny population of 330,000, but include a year’s worth of tourists and it rises to 2.5 million. The biodome is an opportunity to create new and meaningful infrastructure: a statement of change, highlighting the benefits of another way of thinking and of energy-efficient buildings.

At first, I developed the project myself but later on I had valuable backers. After it was chosen by Arion Bank’s business accelerator, Startup Reykjavík, in 2015 it drew in others who helped to develop it, leading us to where we are today and finally realising the scheme. Ideas from other countries have inspired us but the Biodome project will be the first of its kind, anywhere in the world.

Your company name, ‘Spor i Sandinn’, translates as ‘footprints in the sand’. How does that relate to your values?

The purpose of this project is to awaken people’s awareness of the interaction between natural elements and wellbeing. Icelandic nature has two faces – it is beautiful, but also harsh, and it shapes Icelanders. We need to be tough sometimes. So the Biodome will offer year-round access to a lush green environment – a place to soften our outer shells and hearts, to allow us to capitalise on the social dimensions and to create a strong sense of place. The scheme will also contribute to sustainability and stewardship by offering a carbon-neutral building, heated and powered by geothermal energy.

The site is within the Reykjavík metro conurbation, on the edge of the recreational river valley Elliðaárdalur, where geothermal energy is harnessed. Is that why you chose it?

First, the current site is a beautiful spot with an astounding view over the city. Second, from a wider context, we will add something new to the cityscape, retain the link to the geothermal history of the site, foster more interaction and activity in the surrounding area, and function as a regeneration catalyst for the area from a real estate perspective. The location was an outcome of a collaborative process with the city authorities and it fits with other city developments and the planned rapid transport system.

You have now received outline planning consent. How about securing the land?

The planning consent was granted subject to the approval of site plans. As soon as this has been confirmed, we will acquire a long-term lease. This process can take six to eight months. We are currently having discussions with several Icelandic investors, and are open to conversations with international investors too.

Will you be catering for the Icelandic culture of public bathing that so attracts tourists?

Sometimes I say that the springs and hot tubs are our public squares, where Icelanders share ideas and exchange opinions. These thermal spas combine the two most important elements in Icelandic tourism, experiencing nature and culture, and we are incorporating this aspect into Aldin, Biodome Reykjavík.

The hot spring water and geothermal energy will be used to heat the Biodome and to grow lush vegetation that will ensconce visitors, functioning as nourishment for both body and soul. There will be an attractive marketplace in the Biodome selling fresh fruit and produce, as well as an inspiring amenity space and a working area for local people, so tourists will experience both a unique place to visit and a healthy Icelandic society.

Housing a leisure centre inside a greenhouse selling edible vegetation is a unique interpretation of some key trends – luxury, leisure and the use of geothermal and urban agriculture. How do they meet?

Geothermal growing in the cityscape of Reykjavík is not a new idea – just not one that has been widely implemented. An old 1933 advertisement shows a vision of election candidates: to supply warm water to every house in the city and make it possible to construct greenhouses all over town to grow vegetables, fruit and flowers. Today, we also have popular attractions in rural Iceland where guests can experience horticulture and locally grown food in greenhouses.

We have also observed the need for local markets, as depression and obesity have become a growing problem in Iceland, like elsewhere in the Western world; people have become disconnected from natural processes. The Biodome will make healthy choices in local food and drink more accessible by offering day-to-day sales directly from farms, along with our own branded products and some interesting food souvenirs for tourists. At the same time, we are intertwining healthy lifestyle facilities into the design of the building, such as the possibility of practising yoga and meditation in the tropical sphere, or providing meeting spaces overlooking or near the treetops.

How will you raise revenue?

The main income streams will be membership fees for spaces like Tropical Iceland or Farm Laboratory, entry fees for single visits, fees for guided tours and merchandise and rental income from tenants.

There is a growing desire to experience something authentic. As writer Carolyn Steel states in her book Hungry Cities, there is a need to reconnect people with their food and its value, both commercially and culturally, while Professor Tim Jackson argues in his book Prosperity without Growth that we can only reach that future through the sale of value and services with low material throughput. Where does the Biodome fit with this?

I was inspired by Steel’s idea that Western communities need to reconnect people to food, while I find Jackson’s argument about focusing on value and service with low material output (or, as I would put it, emphasising experience) increasingly important. Hence we need to awaken people’s senses and their awareness of the local economy, as well as healthy consumer activity for people and the planet. I would also pay tribute to Olafur Eliasson’s comment, when he explained his glacier installations in Paris 2015, that ‘we have not become as sensitive emotionally as we have intellectually, we need to find ways to touch people’. Aldin, Biodome Reykjavík has grown from this philosophy.

What are your design precedents?

The Eden Project in Cornwall and Tropical World Berlin are comparisons that others have made, and they are both very interesting, just considerably larger and more independent phenomena. We had no ‘obvious precedents’ for Aldin, it will be unique. The project is intended to enhance the existing urban environment by creating green infrastructure to support nearby activities, as well as connecting to walking and cycling routes.

Hornsteinar Arkitektar, a Reykjavík practice known for great urban design and placemaking, has been very closely involved during the development process. How did you choose them?

They are members of the Green Building Council in Iceland and known for sophisticated projects. One thing led to another, and Hornsteinar became backers and advocates of the initial development and they helped with materialising the concept at first stage. It has not been formally decided how the final design will look, and who will deliver the final stages, as we want that decision to be taken with future investors and partners.

When do you expect the Biodome to open?

Assuming that finding funding is successful, and the site planning process is as per our plans, we expect to open late 2018, or by the beginning of 2019.

And beyond the Biodome?

We have already started discussions to develop biodomes in other places in Iceland, aiming to eventually open at least three domestic dome clusters. Then, in the longer term, we have a vision of developing the concept into a franchise, focusing on the Arctic countries, but open to anywhere in the world.